Demand for battery-grade lithium is expected to grow dramatically in coming years as we continue to see increases in the electric vehicle and energy storage sectors. Lithium ion batteries are a crucial component for the transition to a low-carbon economy.

As the anticipated need for domestic lithium resources rises, a number of alternative lithium extraction technologies are also creating interest. These include direct lithium solvent extraction from seawater, and geothermal and oil well brines, as well as mining of lithium-bearing clays. 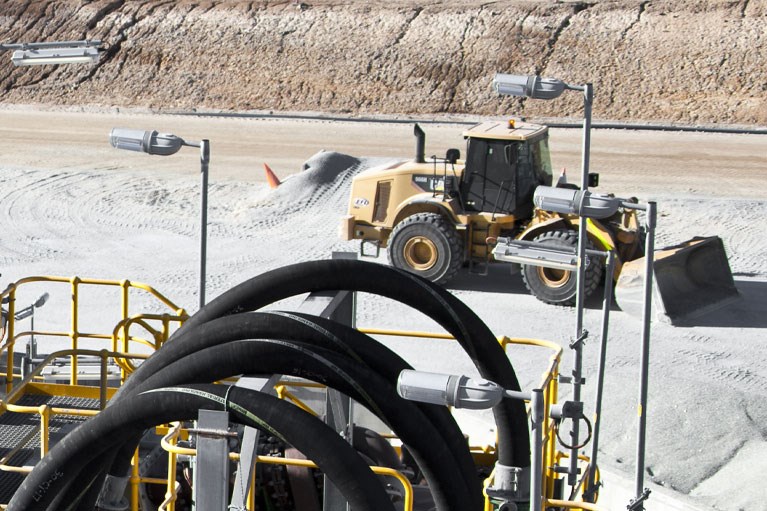 How to Extract Lithium

The majority of today’s commercial lithium production is from those that extract lithium from underground brine reservoirs (salars). Most takes place in the so-called Lithium Triangle, high-up in the Andes, where the borders of Bolivia, Argentina and Chile meet, and in China.

Lithium brine recovery is a straightforward but time consuming process. Salt-rich water is pumped to the surface and into a series of evaporation ponds. Over a period of months, the water slowly evaporates and a variety of salts precipitate out, leaving a brine with an ever-increasing concentration of lithium.

During the evaporation process, a slurry of hydrated lime (Ca(OH)2) is added to the brine to precipitate out unwanted elements, particularly magnesium and boron (as magnesium hydroxide and calcium boron salts). When lithium concentration reaches a certain point, the brine is pumped to a recovery facility to extract the metal, a process that usually includes the following steps.

Hard rock mining is a considerably more complex and energy-intensive process than conventional brine extraction. Although there are over 145 minerals that contain lithium, only five are used for commercial lithium extraction: spodumene, lepidolite, petalite, amblygonite, and eucryptite.

Of these, spodumene is the most abundant, yielding the vast majority of mineral-derived lithium. Australia accounts for much of the world’s spodumene production, with some smaller operations in Brazil, and other mineral-based lithium operations in Portugal, southern Africa and China. By 2025, additional mines are expected to be online in North America and Finland.

After the ore is mined, it is crushed and roasted at 2012°F (1100°C). It is then cooled to 140°F (65°C), milled and roasted again, this time with sulfuric acid, at 482°F (250°C), a process known as acid leaching. During this last step, the hydrogen in the sulfuric acid is replaced with lithium ions, to produce lithium sulfate and an insoluble residue.

As in brine-based lithium extraction, lime is added for the removal of magnesium (a constituent element in spodumene), and soda ash is used to precipitate lithium carbonate from the final purified, filtered solution. Lime slurry may also be used as a pH adjuster to neutralize excess acid from the acid leaching process.

According to the USGS, the only commercial-scale lithium production in the US comes from a brine operation in Nevada (there is also a lithium battery recycling facility in Lancaster, OH, as well as lithium processing plants). However, there is growing pressure to increase domestic lithium production to help secure supplies of this critical metal.

Opportunities exist for direct lithium extraction, notably from geothermal brines from the Salton Sea, CA, and so-called 'produced water' from shale gas fracking in Texas. A number of companies are also actively looking into extracting lithium from lithium-bearing clays, notably in Nevada. Several different production methods are being tested, including acid leaching in both sulfuric acid and hydrochloric acid.

Any use of acid leaching is likely to need a base material, such as hydrated lime, for removing impurities and neutralizing waste before its return to the natural environment.

The end product of both brine and mineral-based lithium extraction technology is most often lithium carbonate. Other common commercial lithium products include:

Lithium carbonate has a range of industrial uses: from battery manufacturing to the production of flooring treatments, cement densifiers, adhesives and glazes. It is widely used as a grease and lubricant, and is an essential medication (as listed by the World Health Organization). It can also be easily converted to lithium hydroxide, which is fast becoming the preferred
lithium compound for electric vehicle manufacturers, since it allows the manufacture of higher-performing, longer-lasting batteries.

The conversion process involves adding hydrated lime to lithium carbonate. Lithium ions then effectively ‘swap places’ with the calcium in the lime to produce lithium hydroxide and a solid calcium carbonate (CaCO3) residue, which is straightforward to remove by filtration or settling.

How Can STT Help?

As a specialist in the design, procurement and installation of dry bulk chemical systems, we are well-placed to support lithium producers with their dry chemical handling needs. We have particular expertise when it comes to storing and handling dry chemical products, such as quicklime (CaO) and soda ash.

We are also a leading expert in the supply of lime slakers, which take quicklime and turn it into hydrated lime slurry so it can be added to the lithium extraction process.

Optimizing the quality of the hydrated lime slurry – its purity and reactivity – offers lithium producers the opportunity to improve the overall effectiveness and efficiency of their lithium production process. A lot can be done in this regard simply by selecting the right lime slaker. With our experience in this area, we are able to support lithium producers when it comes to making the best lime slaker choice for their operational needs.

The quality of the lime slurry is also in the spotlight, as automakers look for higher-purity lithium resources in their quest for batteries that drive further. Lime is one route in which impurities can find their way into lithium products, notably aluminum, which commonly occurs in limestone, but is one element that lithium producers work hard to remove. A modern lime slaker will help to remove such impurities, providing a high-purity hydrated lime slurry. At Carmeuse, the parent company of STT, research and development is also currently ongoing to further improve the rejection of non-process elements in the slaker for the production of even higher purity hydrated lime slurries.

How is lithium extracted?

Is lithium easy to extract?

Extracting lithium from salt-flat brines is relatively straightforward, but is a time-intensive process, since it takes several months of progressive evaporation to reach a high enough lithium concentration in the brine for economic recovery. Lithium extraction from hard rock ores is a relatively complex and energy-intensive process, involving multiple process stages to release the lithium from the ore.

How is lithium extracted from minerals?

Lithium occurs naturally in over 145 minerals, but is commercially extracted from just five. The most important mineral source is spodumene. Extracting lithium from spodumene involves initial crushing, roasting at 2012°F (1100°C), further grinding, and then acid leaching with sulfuric acid at 482°F (250°C).

Extracting lithium from lithium-bearing clays is subject to ongoing development work. A number of processes are being tested, including acid leaching in both sulfuric acid and hydrochloric acid.