Use of Lime in Oil Sands Production

Oil sands production is a type of unconventional oil extraction method, whereby oil is extracted from sandstones that are naturally soaked with bitumen, a heavy and very viscous form of petroleum.

What are Oil Sands?

Although oil sand deposits exist in various regions of the world, only Canada has a large-scale commercial oil sand industry at the Athabasca deposit in Alberta. About 20% of Canadian oil sands are close enough to the surface to be mined using conventional surface mining techniques; the rest must be recovered in-situ. However, the bitumen cannot be extracted via conventional oil drilling, as it does not flow freely. It must first be heated in the ground until it becomes fluid enough to be pumped to the surface. 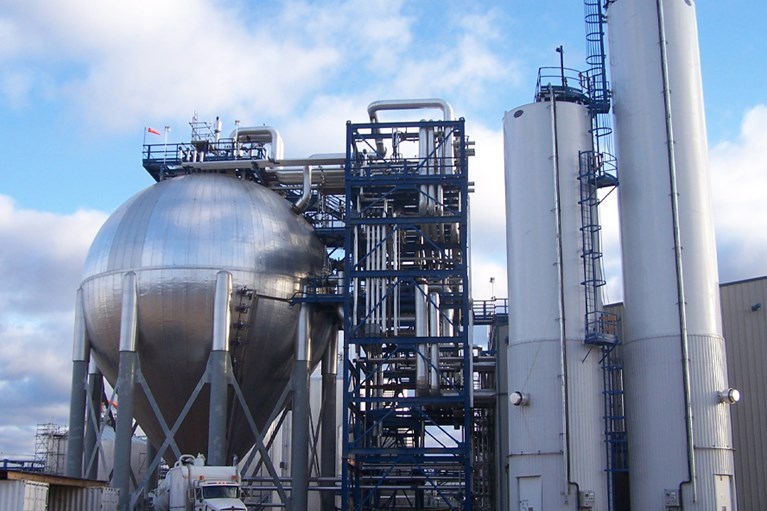 How is Oil Extracted from Oil Sands In-Situ?

There are two commonly-used methods to heat bitumen: steam-assisted gravity drainage (SAGD) and cyclic steam stimulation (CSS). We go into more detail on these below but, as the names suggest, both involve the injection of high-pressure steam into oil sand reservoirs to stimulate production. Condensed steam is then pumped back to the surface with the bitumen. Known as produced water, the condensed steam is treated before being recycled back into the oil sands extraction process.

SAGD involves the drilling of a pair of parallel horizontal wells. Steam is injected into the shallower of the two wells (the injector well), heating the bitumen, which then flows under the influence of gravity down toward the lower well (the producer well). Pumps in the producer well then draw the bitumen and condensed steam up to the surface.

CSS – or huff ‘n’ puff – oil production – uses one vertical well for both injection and production. Steam is injected at high pressure into the oil sand deposit over a period of weeks and then shut-in to allow the steam to heat the bitumen around the well. This ‘steam soak’ softens and dilutes the bitumen, and additionally the high-pressure steam fractures the surrounding rock, creating cracks and openings through which the softened bitumen can flow back to the well.

At the end of the steam soak, the well enters production returning a mix of oil and condensed steam to the surface. This process is repeated several times until the response to steam stimulation falls to the point where extraction becomes uneconomical.

The Differences between SAGD and CSS

SAGD was made possible by improvements in horizontal drilling techniques. It is a continuous process that delivers much higher production yields and improved bitumen recovery rates than CSS , as a result, it is the predominant method for oil sands production today.

However, because it relies on gravity to draw oil toward the production well, it can only be used when vertical permeability is sufficient to allow the bitumen to flow to the second well. There is no fracturing of the rock as in CSS. Therefore, in reservoirs with poor vertical permeability, CSS remains the extraction process of choice.

This highlights a final key difference between SAGD and CSS: steam pressure. Steam is injected at much higher pressure in CSS (i.e. above the fracture pressure of the rock) than in SAGD, where gravity drainage is the primary mechanism for oil recovery.

Most oil sands operations today use once-through steam generators (OTSG). These large drum-less boilers recycle produced water to generate the steam needed for injection into the well. This reduces freshwater consumption and improves energy efficiency (as produced water is recovered at a higher temperature than groundwater).

However, the produced water will typically contain large quantities of dissolved minerals, such as calcium, magnesium, iron, sodium, and silica. These constituents cause scaling in the OTSG over time, which will ultimately lead to corrosion and erosion that may damage the OTSG. To avoid this, the produced water must be treated using lime and other chemical softeners.

These are delivered as dry bulk materials to the oil sands site, where they are mixed with water into a slurry in the case of lime and MgO, or solution in the case of soda ash, before being added to the water treatment process.

As an expert in the design, procurement, and installation of chemical handling systems, STT has a strong history of supporting water treatment in the oil sands industry. We provide support from truck unloading of the dry chemical to delivery of the slurry into the final process, and all parts in between, including storage, flow promotion, feeding, mix tanks, and pumping.

One example is our experience in the design of MgO handling systems. Used to remove silica from produced water, MgO presents a particular challenge in that, when mixed with water, it begins to slake, and slaked MgO (Mg(OH)2) achieves lower silica removal levels than non-slaked MgO. Once mixed, it is important to feed the MgO slurry into the process as quickly as possible to maximize silica removal efficiency and lower the quantity of softener required to treat the water.

STT is global leading expert in the design and supply of lime slaking systems, which produces lime slurry from quicklime rather than hydrated lime. Conditions at oil sands sites – high slurry demand; long distances from lime suppliers; and access to warm produced water for slaking – are such that onsite slaking may offer a more cost-effective solution to your lime slurry needs. Talk to an STT expert today about the benefits of switching from hydrated lime to quicklime slaking.

STT is backed by the experience and expertise of its parent company, Carmeuse, a global leader in lime and limestone products. Carmeuse specialists have over a century of combined industry experience in the optimized use of lime across a range of industry applications, including the supply of lime products for oil and gas extraction.

To expand your knowledge further, our Carmeuse colleagues have put together this helpful article about the different types of lime available and when to use them in water treatment: Quicklime, Hydrate or Lime Slurry?